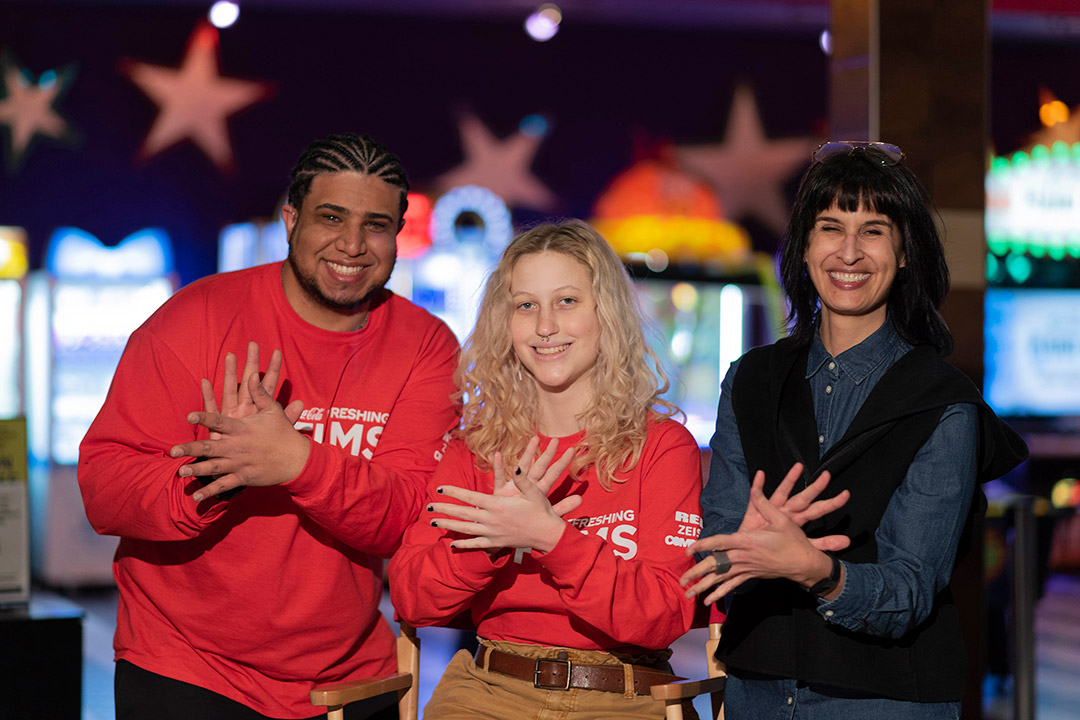 Say Cheese, a pioneering, heartfelt film directed and produced by two Rochester Institute of Technology (RIT) students, took home the top prize in the Coca-Cola Refreshing Films (CCRF) program announced during the final night of CinemaCon in Las Vegas late Thursday. The authentic, cross-cultural project featured the combined creative efforts of students, faculty, and staff in RIT’s School of Film and Animation (SoFA) and the National Technical Institute for the Deaf (NTID).

Co-written by Anna McClanahan, a film and animation: production option student, and Gabriel Ponte-Fleary, a film and animation MFA student, who is deaf, Say Cheese is partly based on McClanahan’s experiences at RIT, including her performances in joint hearing, deaf and hard-of-hearing productions for NTID’s Department of Performing Arts. The university is home to NTID, the world’s first and largest technological college for deaf and hard-of-hearing students.

The commercial portrays a meet-cute story about Chris—a male, hearing college student—attempting to ask his female, deaf classmate named Jessie to the movies. Chris, an American Sign Language novice, clumsily signs a visually similar sequence of words, instead asking her if she wants to go to a “cheese.” This wins Jessie over and the two head to the theater for their first date.

The prestigious CCRF program invites film students across the United States to submit a script for a 60-second branded spot celebrating the movie-going experience. Say Cheese was among four finalists selected from 41 universities across the country. Winning for its first-ever CCRF entry, RIT was the sole East Coast university among the final four, joined by UCLA, Chapman University, and California Institute of the Arts.

Say Cheese and the other three finalist commercials were judged by a Red Ribbon Panel comprised of industry experts including studios and leadership from Coca-Cola, Cinemark Theatres, and AMC Theatres. 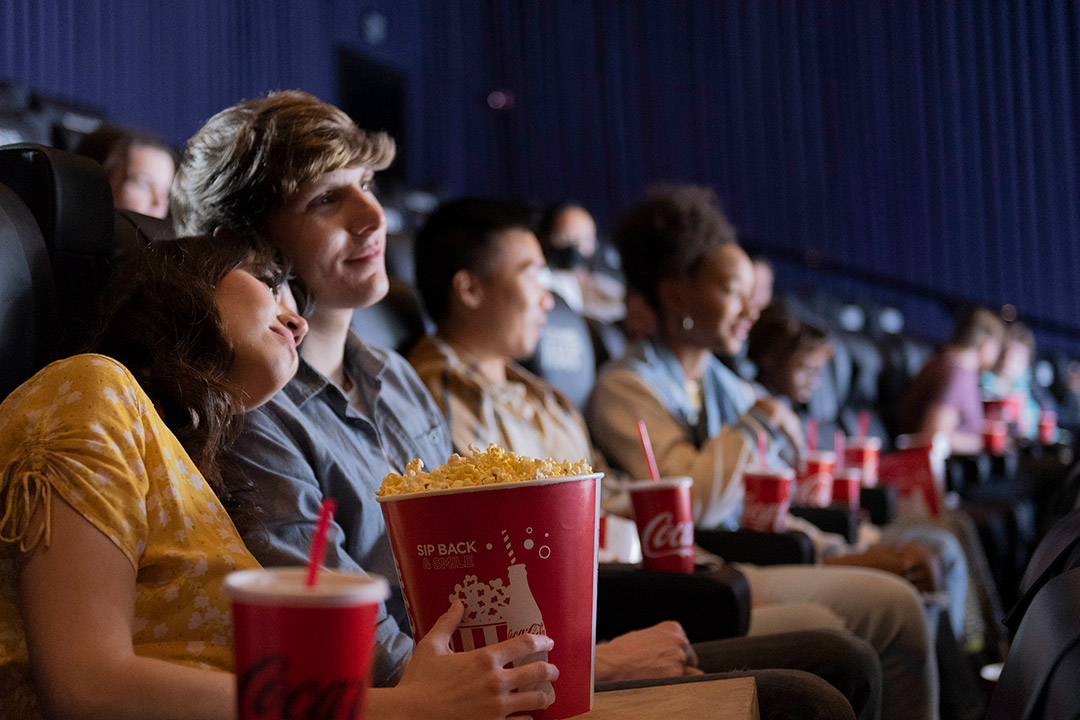 A scene from Say Cheese.

McClanahan said she was “thrilled” upon learning of the win. “I think it resonated because it told a whole human story,” said the California resident and the film’s director. “While it was a collaborative production between the Deaf and hearing communities, the human connection conveyed in the film is applicable to everyone’s lives and relationships. It’s just a wholesome tale.”

Ponte-Fleary, affectionately known as “Gabo” on and off the set, quipped “this big guy literally cried like a baby” upon learning Say Cheese took the top prize.

“It’s a big milestone that’s the result of many sacrifices and hard work from everyone involved,” said the native of Venezuela who served as the film’s producer. He also is a 2018 visual media alumnus and videographer/designer for the Department of Access Services (DAS) at NTID.

Shanti Thakur, SoFA’s school director and the movie’s pre-production supervisor, called the CCRF win a “gold star for our program,” adding, “it really represents what we stand for at RIT, which is students and faculty working together and supporting diversity.”

“It’s finding commonality across cross-cultural communication for a sweet story that goes straight to the heart,” said Thakur, noting that the film kicked off the second day of SoFA’s end-of-semester screenings on Friday afternoon inside the MAGIC Center's Wegmans Theater. 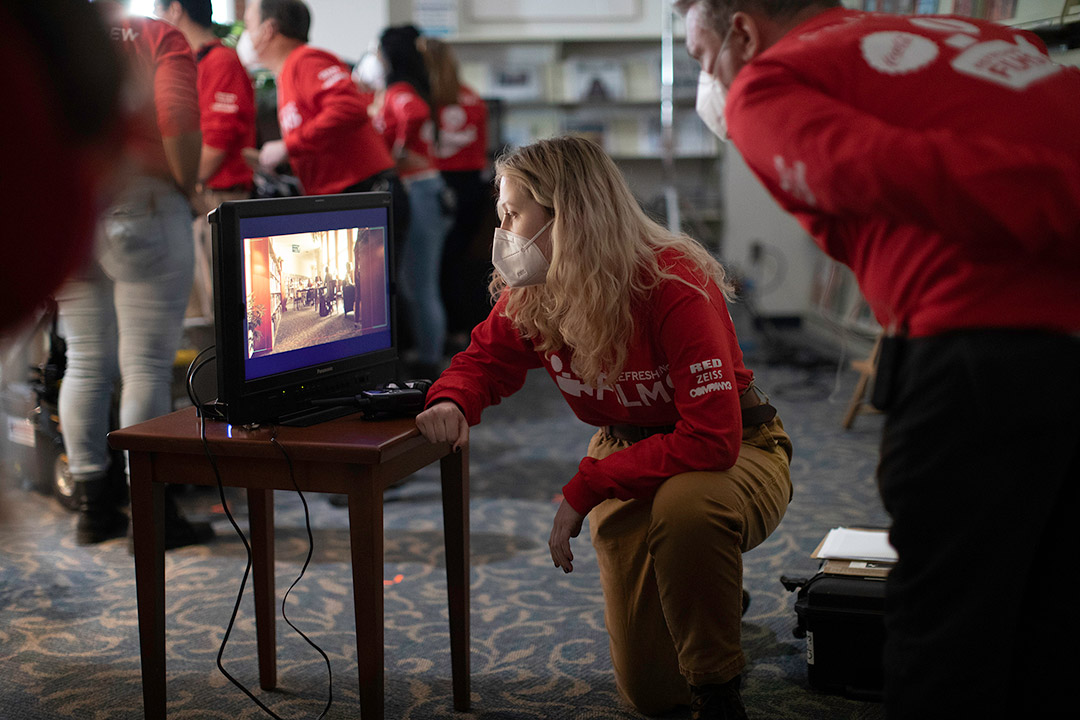 McClanahan and Ponte-Fleary received an $18,000 production budget, along with access to high-end production gear and post production color resources, courtesy of the program and its technical partners, RED, ZEISS, and Company 3. Say Cheese will begin screening in movie theaters nationwide later this year, including Cinemark and AMC Theatres.

In addition to having their film screened, McClanahan and Ponte-Fleary will receive a RED KOMODO camera package and a ZEISS lens kit to help jump start their careers, according to Aviva Kleiner, CCRF program director.

The two RIT students managed a cast and crew of nearly 100 animation and NTID students, faculty, alumni, and cast, including hearing, deaf, and hard-of-hearing people during two overnight film shoots at the Pittsford Community Library and Cinemark Tinseltown movie theater. Each edited and prepared the film for professional color session with Company 3. McClanahan and Ponte-Fleary managed the project’s logistics, production, and editing to successful completion.

Victoria Pon ’21 (psychology), who played Jessie, was among the deaf and hard-of-hearing cast and crew. Weston Young portrayed Chris in the film. Interpreters from NTID worked tirelessly to ensure effective communication across the entire team, according to Thakur. In-kind support for the project was provided by the School of Film and Animation, the College of Art and Design (CAD), and NTID.

“We had so many incredibly talented people on set,” McClanahan observed.

Thakur agreed, citing the “incredible teamwork” across two colleges, including the support of CAD Dean Todd Jokl and Gerry Buckley, NTID president and RIT vice president and dean. “I’m so incredibly proud of everyone’s hard work, determination, creativity, and collaboration,” she said. “The faculty, staff, and interpreters were so amazingly generous and supportive.”

“We are positioned in a very specific way in this country, which is we have a fabulous film program combined with the amazing work done at NTID,” Thakur observed. “It’s a win seeing more diverse representation in the theater, and that’s a win for everyone.”

McClanahan was philosophical about the film’s success. “If you have an idea, just run with it!” she said. “You never know where it will take you, or the connections you’ll make in the process. Everyone is deserving of having their story told or being able to tell their story.”

Ponte-Fleary hopes people who see the film will “be inspired to learn American Sign Language and see Deaf people as equals.”

“We can do anything, except hear,” he said.